Are you confounded by courtroom communication and longing to learn some legal lingo?

All professions, industries and many other specialist groupings have their own codes, languages and acronyms which can exclude outsiders – intentionally or otherwise. Lucy Read is a family law barrister and chair of The Transparency Project. She joined Michael Rosen and Dr Laura Wright on Radio 4’s Word of Mouth to discuss the language of the courtroom.

All barristers and solicitors are lawyers, but a lawyer can’t be both – they are either one or the other.

Counsel is another name for a barrister. When the judge asks for «counsel only» it means she wants to see only the lawyers without their clients. Queen’s Counsel (QC) is a senior barrister who has been given the rank of «QC» as a mark of excellence. Also called a silk (they «take silk» – something to do with the special garments worn by QCs). Any barrister who isn’t a QC is a «junior barrister» no matter how senior they are. Barristers who are experienced but not senior enough to be a QC are called a «senior junior». Yes, daft isn’t it?

Chambers are what the rest of the world call offices. Mainly different because barristers don’t (generally) work in a «firm» or company, but are independent sole traders who club together to pay for a room in chambers and share clerks (employed staff who receive enquiries, get in work and allocate it).

No, it’s probably not what you’re thinking. Skeleton is a written legal argument in outline form. 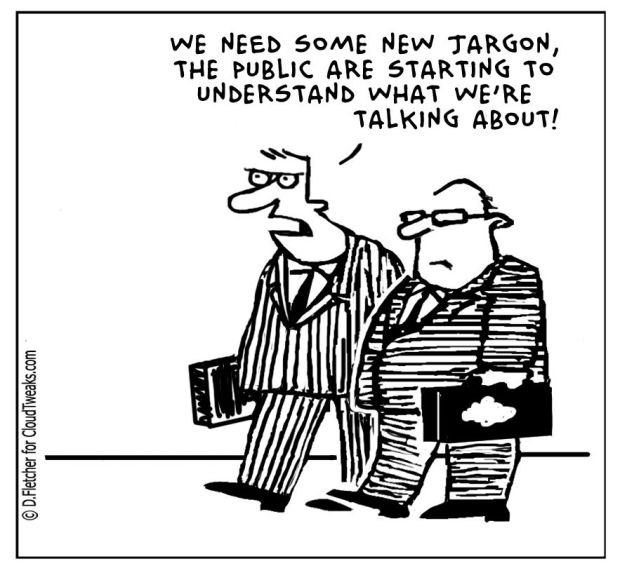 Submissions are the lawyers’ speeches at the end of the case (this is sometimes done in writing).

A phrase used by lawyers to mean the things that are in dispute – but only the ones that actually need to be decided for the judge to make a decision. (Cue affronted client when told that something that is very important to them is «not an issue» and hurried explanation that what is important to the client is not always relevant for the judge…).

This Latin phrase means «in the absence of a party» and applies in family cases mainly when one party goes to court to get a domestic violence injunction in place before the other party is told (because if warned in advance they might take unwanted action). An «ex parte» hearing also includes a hearing that the other party is aware of but excluded from, such as in a national security context.

This relates to private correspondence and negotiation that the judge should not be told about until after they have decided the case.

More Latin. Prima facie means «on the face of it». Someone who has a «prima facie case» is someone who has presented enough evidence for a case to be looked at, but doesn’t mean the case will necessarily be heard in full once the details have been thoroughly scrutinised.

Housekeeping refers to the administrative tasks that need to be sorted out at the start of a hearing, such as which order are the witnesses going in and checking everyone has the appropriate documentation.

Part-heard is when a hearing breaks off to a later date half way through the evidence. When the case is part-heard the same advocates and judge have to continue the case until the evidence is finished and the judgment given – which means lots of diary juggling.

«My learned friend» is what barristers call one another in court when they have forgotten the other one’s name.

Simply «My friend» is what barristers call solicitors when they are in pompous git mode (making the point that the solicitor isn’t a barrister).

Disguised compliance is a complicated term social workers use when they think parents are lying but can’t prove it (i.e. when parents disguise the fact they disagree there is anything wrong with their parenting by superficially doing what they are asked to in order to get social workers off their back). «Putting on a show» or «game playing» would work just as well.

Paramountcy principle means that a child’s welfare trumps everything else.

The world «paginated» refers to numbering the pages of a document, and a «bundle» is what lawyers call the files of court papers, put in order and separated into numbered sections so that the judge, lawyers and witnesses can all find the same documents in the same place (in theory). A «paginated bundle» is therefore simply the files of court papers, with page numbers, and separated into numbered sections.

To learn more about the language of the courtroom see Lucy Read’s website, Pink Tape.

We have recently read in K International this interesting and funny article about the history and usage of today’s common internet symbols # (hashtag / etiqueta), @ (at / arroba) and Like Button (botón «me gusta»). Don’t waste this opportunity to go into the matter and know more. Here’s the transcription of the article:

The online world has a vocabulary all its own. And it’s not all words, either. But while we think of “hashtags” and “likes” as modern English inventions, they go back much further. In fact, these Internet symbols are much older than the Internet, and they weren’t originally English.

Want to learn more?  Let’s take a look at the multilingual history behind 3 of the Internet’s most common symbols.

Internet Symbols Around the World: The Hashtag (#)

Hashtags have taken over the Internet. That’s not a bad thing. Twitter would be all but useless without them. (Unfortunately, they’re also invading our speech. Surely I’m not the only one who dies a little inside everytime someone says “Hashtag” followed by something intended to be clever or snarky?)

But the# symbol hasn’t always been  called a “hashtag,” and it’s much older than the Internet.  The hashtag started out as an abbreviated of the Latin word for “pound,” libra pondo. Prior to Twitter, Americans still called it a “pound sign.” Sometime between the 17th and 19th centuries, people got tired of writing “lb” for “pound” and starting writing # instead. So, it’s basically an abbreviation of an abbreviation.

In 1968, the hash sign was added to the push-button dialpad created by Bell Labs for the telephone. But for some reason, the people working at Bell Labs decided that terms like “pound sign”, “number sign” and “hash sign” were inadequate, so they rechristened it the “octothorpe.” According to the New Statesman, this may have been part of a juvenile plot to ““piss off” international users by inventing a name that is difficult to say in some languages.”

Fortunately, octothorpe didn’t quite catch on.

In the early days of the Internet, the symbol was used to designate specific chatrooms. And so, back in the social media Stone Ages of 2007, a Google employee named Chris Messina suggested using the symbol to designate specific groups or topics on conversation on Twitter. The powers that be at Twitter didn’t like the idea, but everyone else did, so here we are today.

And what is a hashtag called in other languages?

Most languages have chosen to borrow the English word hashtag, perhaps customizing it to suit local accents.  For example, in Japanese it’s hasshu tagu.  But at least officially, in French it’s mot-dièse, which means “sharp word,” referring to the similar-but-different sharp symbol used in music.

And what about the @? When most of us see @ today, we think of email or perhaps Twitter. But the @ symbol has been in use for centuries. In fact, it’s been around for so long that linguists aren’t quite sure where it comes from.

It might have been business shorthand used to represent the words “each at” when pricing items for sale. Or, it could have been an abbreviation of the Latin word ad, which means “at.” Or possibly the Greek ανά, for “at the rate of.”  Or maybe it came from the Norman French à, because people got tired of picking their hands up to make the accent mark.  Hey, if you were a medieval scribe, you’d be looking for shortcuts, too!

Whatever its origins, it goes back at least as far as 16th century. The first known example that we have is from a letter from a Florentine merchant, where @ is used to discuss the price of wine.

That said, the @ symbol was fairly obscure until email took off the 1990s. The use of the @ sign as part of an email address was the brainchild of BBN Technologies’ Ray Tomlinson. And now, of course, it’s taken on a new life as a way to tag or reply to another user on social media networks like Twitter and Instagram.

In English, @ is pronounced “at” or “at sign.”  Interestingly, other languages have come up with much more poetic names for it. Here are some of my favorites:

It’s hard to imagine the Internet without Facebook’s Like symbol, but where did it come from? Many people believe that the thumbs-up sign is another legacy from ancient Rome. The story goes that crowds at ancient gladitorial events could decide whether to spare losing combatants, or have the victorious gladiator finish them off. The crowd issued its verdict via two familiar hand gestures: thumbs up for life, thumbs down for death.

“Thumbs Up” Probably Doesn’t Mean What You Think It Means

It’s a pretty story, but it might not be true. And it’s actually based on a translation error.  Juvenal used the Latin phrase pollice verso to describe the gesture in question. That was translated as “thumbs up,” but it actually just means “turned thumb.” And in his book Gestures, anthropologist Desmond Morris suggests that “what spectators in fact did was extend their thumbs for a kill and hide their thumbs for an acquittal. This made sense in an arena as vast as the Colosseum, where the kill and no-kill signals would have to be strongly contrasting to be visible at all.”

Regardless, the thumbs-up sign is now one of the most well-known online symbols, thanks to Facebook’s “Like” button. However, that white and blue thumb is not nearly as visible as it used to be. While you still see it on Facebook, the “Like” button embedded in other websites was redesigned in 2013. And the thumb didn’t make the cut.

Facebook claims the redesign was for aeshetic reasons, and that’s probably partially true. But the OneSky blog pointed out another reason that the thumb might have been replaced:

Apart from Facebook’s stated motives for the redesign, there are also some compelling reasons for a redesign from a localization perspective. As a general rule, a single gesture may have very different connotations in different cultures. And while the thumbs-up signal is common in the United States and many other countries, it may be seen as inappropriate in some places.

And in fact, according to Discover Magazine, Italians think of the thumbs-up sign as American.

An interpreter has a really tough job to do, it can drive anybody crazy! 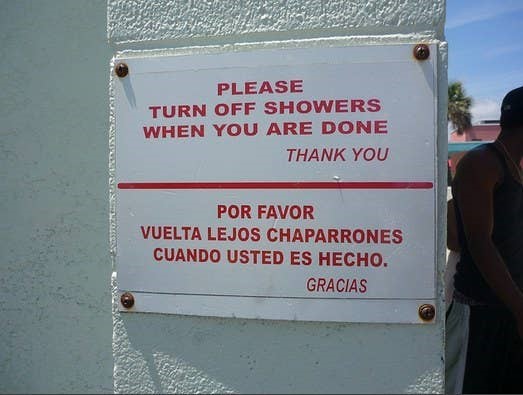 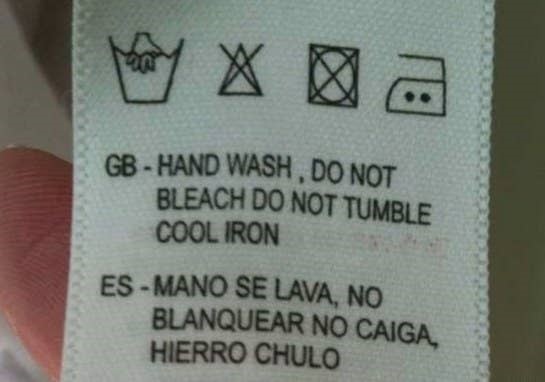 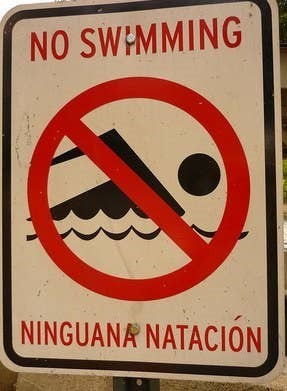